Relais I Due Roccoli > Surroundings > Brescia 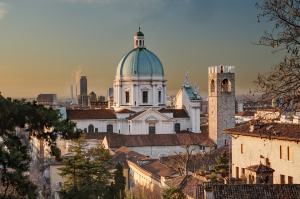 Brescia, the administrative capital of the province of Brescia in Lombardia, is also known as “Leonessa d’IItalia” (Italian Lioness) and has its origin in a Gallic Cenomani small village, later become a Roman colony called Brixia.
In 2011, Brescia received an important recognition: the monumental area of Roman Forum and the monastic complex of San Salvatore – Santa Giulia, today the city museum with about 11.000 works of art and many archaeological finds, have been inscribed in the World Heritage List by UNESCO. 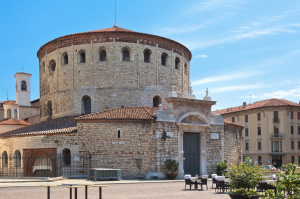 Actually, Brescia preserves a rich cultural and historical heritage including most of the monuments that create its historic town centre. Dating back to the Roman Age or to modern ages, you can admire many religious, civil and military architectures. Among the others, “Duomo Vecchio” (Old Cathedral), one of the most important Romanesque rotunda, the renaissance “Piazza della Loggia” and “Broletto”, the ancient Town Hall in “Piazza del Duomo”. 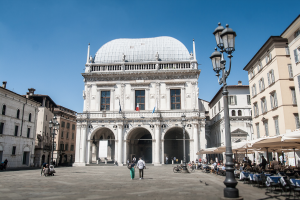 One example of military architecture is the Castle, built in the 13th century by Visconti family on top of Cidneo Hill. Enlarged in the 15th century and, later, in the 16th, once it lost its original defensive function, it turned into a beautiful big public park that still exists today and still offers a stunning panoramic view. Inside its walls, it hosts the Risorgimento Museum and the Arms Museum.
Brescia is also surrounded by several green areas: the “Parco delle Colline” (Hills Park), instituted to protect Monte Maddalena and Ronchi, the park of the Castle going from Cidneo Hill to Parco Ducos, “green lung” of the city.